A high-tech ice cream maker, which prepares different flavors of sundaes and milkshakes just like the customer wants, will be an attraction starting in December at Garten Shopping in Joinville. Through a tablet, the customer personalizes their product, pays by credit or debit card and receives the product without any complication. One of the differentials is the experience of being served by a robotic arm, the Icebot, which will delight the kids and techies with its sympathy. Sundaes and milkshakes in various flavors will be available in the kiosk, all served in glasses and biodegradable straws.

The novelty is part of Industry 4.0, which integrates automation into people’s daily lives. According to the manufacturers, the robot reduces waste by 10-15% and increases productivity by up to 25%. Roboteria is a Joinville company, which emerged from the dream of three friends to bring a new concept to the market. 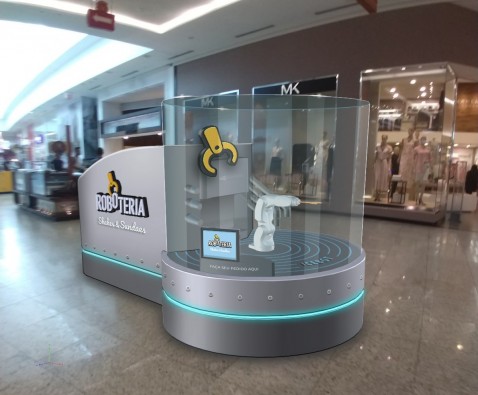 Intending to connect technology to people’s daily lives, engineers Caio Arantes, Guilherme Menegaço, and designer Roberto Homem de Mello came together to create an innovative operation that will be 100% conducted by a robotic arm. The idea came from one of the partners, who works in the industrial sector and saw a way to offer a new experience to the public with the product.

“This market has grown abroad, not only for its practicality, but also for its innovation and technology,” explains Mello. Installed at Garten in December, Roboteria will be the country’s first in this format. “We chose Garten because of the high flow of people who monthly pass by it,” says the businessman.

For Rafael Fiedler, Almeida Junior’s Marketing and Digital Director, the new operation will provide the customer with a unique experience involving technology. “The company has innovation in its DNA, which is spreading in all areas, including the commercial area, and Roboteria is a concrete example of this,” he says.